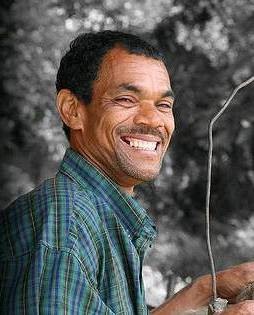 One of the reasons I love living here in Northern Chile is the great variety of personalities represented in the people who live here.

Truly, the culture we enjoy in Northern Chile is as diverse as the history of this region, and by reason of Zofri and the multinational customers it serves, we enjoy a variety of cultures from all over the world.

I love the people of Northern Chile. They make me smile.

I met an Iquiqueno during my first week in Iquique years ago who had that effect on me. As I was leaving the Zofri Mall, I encountered a very friendly gentleman on the curb named 'Sanchez' selling DVDs of recent movies. To my surprise, I noticed that he had "The Passion of the Christ" available for purchase, for only one luca! "¿Que onda?" I said, and went on to ask him how it was possible that he had movie available before it was released in the theaters, and how he could sell it for only one luca. "It's pirated" he replied, with the kind of enthusiasm that great salesmen display when they know they have a great product at a great price.

"But Sanchez," I replied,  "are you not aware that selling pirated DVDs is against the law, and that you are essentially robbing Mel Gibson, and thousands of others in the EEUU and Inglaterra who work hard to produce movies like this?" I inquired. He just shrugged his shoulders, and smiled even bigger at me.

I had to admit, this guy was very charming. So I continued, "Look" I said, "I know a couple guys in this mall who are looking for workers. You could get a real job, and stop working in crime."

"No thanks," he replied, still grinning, "I like my job and what I do."

We debated this a few more minutes, and when it was clear to me that Sanchez was not going to take advantage of the opportunities I mentioned, in exasperation I said, "Fine. If you are happy with your life as a lazy thief, great. Caio!"

As I was about to turn and leave, I noticed that the ever-present smile on Sanchez' face had turned to a frown, and that he was upset.

"You offended me." He replied.

"I offended you because I called you a thief?" I said.

"No, of course not." Replied Sanchez. "I am a thief, no question about that. I am offended because you called me lazy. Lazy I am not! I work here everyday without fail."

I laughed so hard I thought I would explode! Only here in the North can you find happy, content thieves who take pride in their work-ethic.

Sanchez has long since left Iquique, looking for better pastures I guess. That the memory of Sanchez to this day brings a smile to my face, (and lots of laughs whenever I tell the story) does not change the fact that, apart from his enthusiasm and gregarious attitude which I enjoyed, he still was living his life in a misguided, wasteful way. For even if you think that Sanchez was clever, the truth is that God has far greater things in mind for Sanchez than just living hand-to-mouth, day to day, violating the law just to earn enough for the next meal. God's plan is that we "have life, and have it abundantly."

I understand what it is to not have any money, and to wonder where your next meal will come from. I've been broke and out of work twice in my life, and it is not easy.

But everyone of us, regardless of our religious upbringing, ultimately has to answer one question each day: "Am I going to be a blessing, or a curse today?" Put another way, "Am I going to do things that please God today, or offend Him?" Because no matter if you were raised Catholic, Evangelical, Islamic, Hindu, or Buddhist, all the world's major religions say the same thing: "Thou shalt not steal."

It starts with each of us individually.

The other day, I tried to park in front of the Post Office in Iquique, when a very nice woman informed me that the spot was reserved. I said "I'm only going mail a letter, can I just park here for 2 minutes?" She said "OK", but then I remembered my thesis. "It's up to me," I said to myself. I restarted my car, and moved it to legal parking about a block away. It cost me no more than an extra minute, and probably no one would have known or cared that I "broke the law". But ultimately I had to decide, "Do I want Iquique to be a place where everyone does whatever the hell they want, or a place where we respect each other and the rule of law?"

Do you park where it says no parking? Are you taking electricity that doesn't belong to you? Do you take supplies from the office home? Do you cheat and pay a bribe to get your smoking, sputtering auto through revision technica?

When we decide to play by the rules, to respect authority, to obey the laws of Chile as well as the law of God, something amazing happens. Things begin to change. God starts blessing us. We feel better about ourselves. We earn more. We live more. We smile more.

Want to master Microsoft Excel and take your work-from-home job prospects to the next level? Jump-start your career with our Premium A-to-Z Microsoft Excel Training Bundle from the new Gadget Hacks Shop and get lifetime access to more than 40 hours of Basic to Advanced instruction on functions, formula, tools, and more.

Other worthwhile deals to check out: